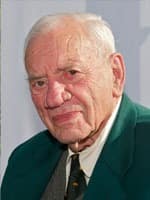 Dr Ian Player was one of the world’s most outstanding conservationists and environmental statesmen. Born in South Africa in 1927, he “earned his stripes” in the transitional era during which Africa’s protected areas were being created and tested. With his team, he pioneered the saving of the white rhino from extinction through Operation Rhino.

After leaving government wildlife service, Ian founded the Wilderness Leadership School, the first organization in Africa dedicated to providing a pure wilderness experience for people of all backgrounds, races and nationalities. Started during the troubled days of apartheid, this multi-racial education and experiential program spawned a global network of conservationists from all sectors of life who are committed to saving wilderness and wildlife.