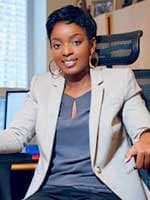 Advocate Ever Vimbai Chinoda is an International Animal Law Advocate. She is the Founder and Co-director of an international non-profit organization [Speak Out For Animals] that seeks to protect animals through the legal system in Africa. Speak Out for Animals is organised to educate on animal law and lobby for policies and legislation that are in the best interest of animals in Africa.

Through Speak out for Animals she has facilitated the training of 20 lawyers on animal laws, inspiring the best and the brightest minds to apply creative legal strategies to help establish greater legal protections for animals through case monitoring of wildlife cases.

She is a seasoned Lawyer herself who graduated from the University of Zimbabwe in 2010. She Joined Zimbabwe Parks and Wildlife Management Authority in 2012 as a Wildlife Attorney, at which time she trained rangers throughout the country on wildlife law. She worked as a prosecutor for three years under the National Prosecuting Authority in Zimbabwe where she prosecuted several animal related crimes with resounding success.

In 2016, she rejoined Parks and Wildlife Management Authority, and she compiled a wildlife reference guide and case monitored the case of Cecil, the lion. Ever has trained prosecutors, lawyers, rangers and police officers on wildlife law. Ever holds a Master’s degree in Animal Law from Lewis and Clark Law School, USA which makes her one of the few African Animal Lawyers and the first in Southern Africa. She is now a renowned International speaker and has made presentations on several international forums including the 25th Animal Law Conference, Global Animal Law Conference in Hong Kong, Free the Elephants Inter Conference and Film Festival in Portland. She obtained her Bachelor of Law Honors at the University of Zimbabwe and a post graduate Masters degree in Corporate Governance and Strategic Management. Ever’s vision is to see African lawyers dedicate their time and practice to animal law.