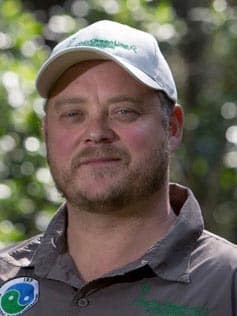 Sean Willmore is a former Australian Park Ranger (11 years) and now Founder and Managing Director of the Thin Green Line Foundation, and the current President of the International Rangers Federation, a non-pro organization made up of 60 Ranger Associations in 46 countries, established to raise awareness of and support the critical work that the world’s park rangers do in conserving our natural and cultural heritage. It is the largest ranger organisation in the world.

While undertaking his work Sean has travelled to and worked with rangers in over 50 countries on 6 continents. His efforts to bring attention to the dangerous work undertaken by these warriors has won him international acclaim, through his documentary The Thin Green Line.

His continual inspiration is the men and women, the park rangers worldwide, he represents who do this front-line work on a daily basis. In addition to producing an award-winning documentary The Thin Green Line, Sean has also helped develop a popular series of children’s books (Ranger in Danger), music cd (Green Line Grooves), and numerous music events and fundraisers. Sean is the recipient of a number of awards, including United Nations Association of Australia Environment Award, International Ranger Federation Presidents Award, Royal Humane Society of Australia Bravery award, Awarded Honorary Lifetime Californian Ranger Award, Herald Sun Pride of Australia Medal and the Melbourne Sustainability Award for Contribution to Sustainability.