Akashinga (“The Brave Ones”) nature protected by women

‘Fortress-style’ conservation is no longer an effective or long-lasting solution to building relationships or sustainable nature preservation practices. An innovative model is needed: one that brings communities and conservation together. This model is Akashinga.

We’re on a mission to scale our community-driven conservation model, empowering disadvantaged women to restore and manage a network of wilderness areas as an alternative economic model to trophy hunting.

BORN FOR A NEW WORLD

‘Fortress-style’ conservation is no longer an effective or long-lasting solution to building relationships or sustainable nature preservation practices. An innovative model is needed: one that brings communities and conservation together. This model is Akashinga.

In 2017 the IAPF’s Akashinga program was born and the first all-female, armed anti-poaching unit in the world was recruited and trained in an abandoned trophy hunting reserve in Zimbabwe. In the first 2.5 years Akashinga helped drive an 80% downturn in elephant poaching in Zimbabwe’s Lower Zambezi Valley, one of the largest remaining populations left on earth. Our bold goal is to employ 1,000 female rangers that protect a network of 20 nature preserves under IAPF management by 2025.

Akashinga is not just about protecting the natural world.

The program has now set down roots and has expanded to six wildlife preserves under contract, three of which our operations are underway 463,000 acres. We are in the process of training 160 more women in 2020 as full-time rangers as we scale towards our 2025 goals.

We have learned that when we put women at the centre of community-led conservation, they can focus on their personal vision, education and development. This creates cascading benefits across community development where conservation becomes an automatic bi-product led by the communities themselves.

Akashinga is a platform for women to change the world for the better. It is women carrying out one of the most demanding and respected jobs in the world while thriving at it and building their own lives, their families and their communities in the process.

Through long term partnerships with local communities, our focus is securing and resurrecting areas of biodiversity and strategic importance that would otherwise have been lost to human settlement, trophy hunting, timber harvesting, agriculture or mining.

We support areas that need the support, not the ones that have it.

In doing so, the Akashinga model injects 62% of operational costs directly back to the local community - turning biodiversity conservation into a community project. 80% of this reaches the community at the household level. The first pilot project area in Zimbabwe puts the equivalent amount of money into the community every 34 days that trophy hunting did per annum. 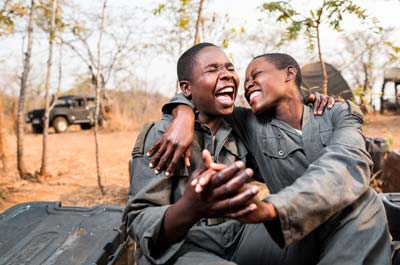 Sign up to get news straight from the field.
This is some text inside of a div block.
Thank you! Your submission has been received!
Oops! Something went wrong while submitting the form.